Kostas Maravelias was born in Rhodes.

He started his music career as a Dj in a local café bar (bistro) on the island of Rhodes at the age of 16. One year later he started working as a

radio producer in the local radio station TOP FM RHODES. Since then he has spent every day of his life for the next 15 years in different radio stations of the island (659 FM, SKY RADIO, AEGEAN ANT) where he has been given the chance to show his music choices in public. 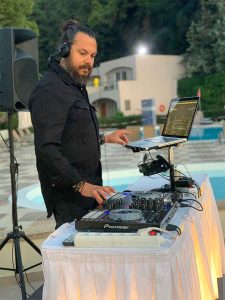 At the same time, he started working as a professional Dj in bars and clubs and other popular entertainment places on the island of Rhodes (WINNER, MYTHOS, LE PALAIS, FREDDO, EMPASY, BALTZAZAAR, LIMELIGHT, MYLOS, DESNUDA, ANGEL, PAFFUTO, PAFFUTO MED, ΘΕΑΤΡΟ, COLORADO, KALUA, SOHO, BOULEVARD) Now he works as Resident Dj in RONDA CAFÉ RESTAURANT. His music movement does not stop on the Island of Rhodes. While he was studying in Athens he played as Dj in the most famous places (Hood, VINILIO, …).

He has many years of experience in V.I.P PARTY and wedding receptions. He has cooperated with PRIME AUDIO VISUAL (a reliable company in Athens for many years). Although his career has changed because of driving school, his devotion to music is the thing that sets him apart from all of these years. He has cooperated with many famous Greek and foreign music producers and DJs and he has played music in loads of Greek islands in Greece (Mykonos, Santorini, Crete, Paros, Kerkira, Kos, Symi)

He has also held events for V.I.P.S His many years of experience in music made he is well known throughout music (60’s, 70’s, 80’s, 90’s, 00’s) as well as in contemporary Greek and foreign music. His love for music and the gift of perception and music reproduction makes him more and more creative to embark on new musical journeys. Since 2008 he has founded his own company on the island of Rhodes Events4you Entertainment by

Events 4you Entertainment by Kostas Maravelias aims to provide quality

services in the field of music, sound, and entertainment at personal,

The 4you Entertainment event by Kostas Maravelias consists of experienced professional DJs and sound recorders as well as people with extensive know-how in organizing events and communication.

In its twelve years of operation, Events 4you Entertainment by Kostas

Maravelias has successfully undertaken and handled a large number of

events in branded venues with high standards of requirements:

Great love for the subject

• The extensive experience of its executives, combined with the desire to

fully meet the needs of its customers, Events 4you Entertainment by

Kostas Maravelias has so far succeeded and surpassed the expectations of even its members.

But the biggest success, apart from the financial figures and numbers, is

To the question “What is the secret of the success of an event” the members of the 4you Entertainment event by Kostas Maravelias simply and convincingly answer that: There is no secret, the power you get when it creates happiness is huge. We are just trying to verify our logo: Facts

that makes you… smile!

And our greatest reward is just that, as we feel we have made people smile with our work, this simple yet so precious! ‘The key to success

… The reason is obvious and simple: We try harder and harder to make people SMILE!